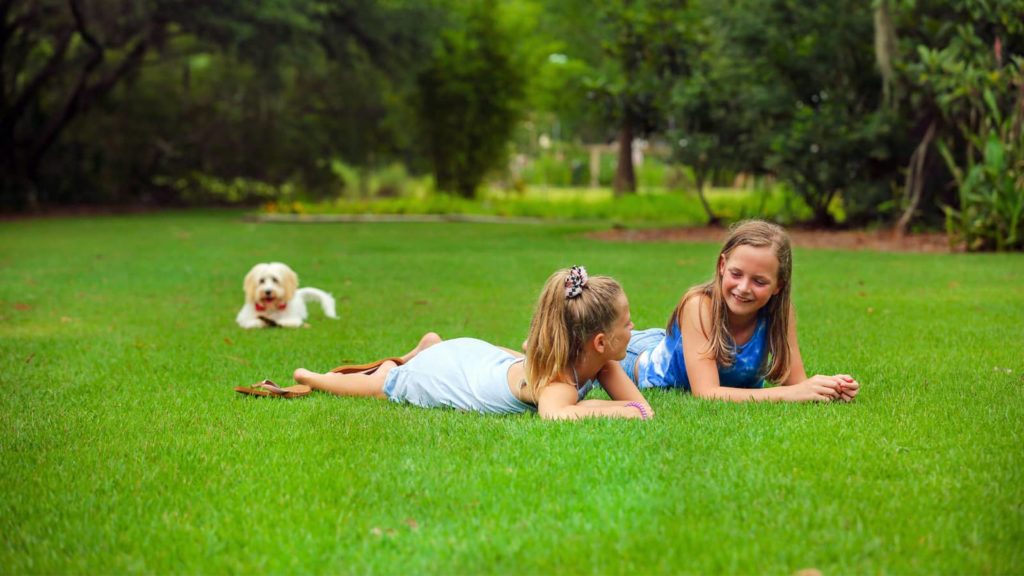 EMPIRE® Zoysia, The Proven Zoysia Grass®, has been the standard across Florida lawns for over 20 years. A direct result of its durability, adaptability and improved aesthetic qualities, EMPIRE’s revolutionary performance really shines in the Sunshine State. EMPIRE thrives in tropical areas and demonstrates an outstanding appearance all year long.

When it comes to choosing a grass for your Florida home lawn, options may seem a bit limited. Florida’s climate is filled with rain, humidity, heat and even hurricanes. There isn’t a “plant it and forget it” grass and all Florida lawns will need some maintenance. But when you add up EMPIRE Zoysia’s benefits, it makes it the clear choice for Florida’s demanding climate.

EMPIRE is not just a zoysia grass—EMPIRE is the best grass for Florida. EMPIRE was developed in Brazil’s tropical region, which allows it to thrive in the Florida climate with ease where other zoysia grasses notoriously fail. Featuring tough runners, rhizomes and deep roots that provide excellent sod strength, EMPIRE effortlessly tolerates stressors like wear and tear from kids or pets and periods of drought. EMPIRE is family friendly, pet safe and most of all, it limits many of the factors that stress homeowners—from unsightly damage that won’t recover to natural insect control. For transplants to the Sunshine State, EMPIRE reminds people of the grasses in the North.

“It’s nice because you can mow it at a shorter height, which creates a nice clean, crisp look on that lawn,” says Tiffany Bailey, Owner of Bayside Sod in Sarasota. “It definitely stands out if you are driving by a neighborhood and there is a nice EMPIRE lawn. [You would say] wow, that one really sticks out nicely.”

The fall season is the perfect time to install EMPIRE sod as temperatures cool down from the summer highs in the Florida climate. With plenty of time between fall and winter for EMPIRE to root down and establish, your new EMPIRE lawn will visually pop in the spring. Similar to other times of the year, you’ll want to maintain a healthy watering schedule that keeps the sod damp, but not too wet during EMPIRE’s 30-day establishment period. With other grasses, frequent watering introduces a higher risk of disease than with EMPIRE Zoysia. EMPIRE is adapted to tropical, humid and warm climates, so it’s more likely to withstand fungus.

Chinch bugs love Florida and Florida lawns! Yet, chinch bugs don’t like setting up camp in EMPIRE Zoysia. But, if being chinch bug-resistant is not enough to get you to join the EMPIRE movement, there are plenty more reasons to choose this medium-bladed, dark green zoysia grass.

EMPIRE is drought tough. In other words, EMPIRE’s natural dormancy mechanism allows it to go off-color and preserve itself in times of drought—but that color will come back within a short amount of time with the return of water. In comparison, St. Augustines, found throughout many Florida home lawns, hold their color but when they start turning brown from drought, they aren’t going dormant—they’re dying. Conveniently, EMPIRE has the ability to blend seamlessly with St. Augustine lawns as EMPIRE features a wider blade that has a similar appearance, but is more tolerant and durable than any competitive sod. EMPIRE is softer, greener, denser and far more inviting to play on.

EMPIRE’s tagline read, “One Lawn…Many Benefits,” while it was being developed. This still stands true after more than two decades of proven performance in Florida. To find out more information read our EMPIRE Zoysia Homeowner Maintenance Guide. Be sure to also check out a Sod University article on an interview with EMPIRE’s breeder, Roberto Gurgel, in EMPIRE Zoysia: Breeder Profile.