How to Use SpeedZone Broadleaf Herbicide for Turf to Control Clover 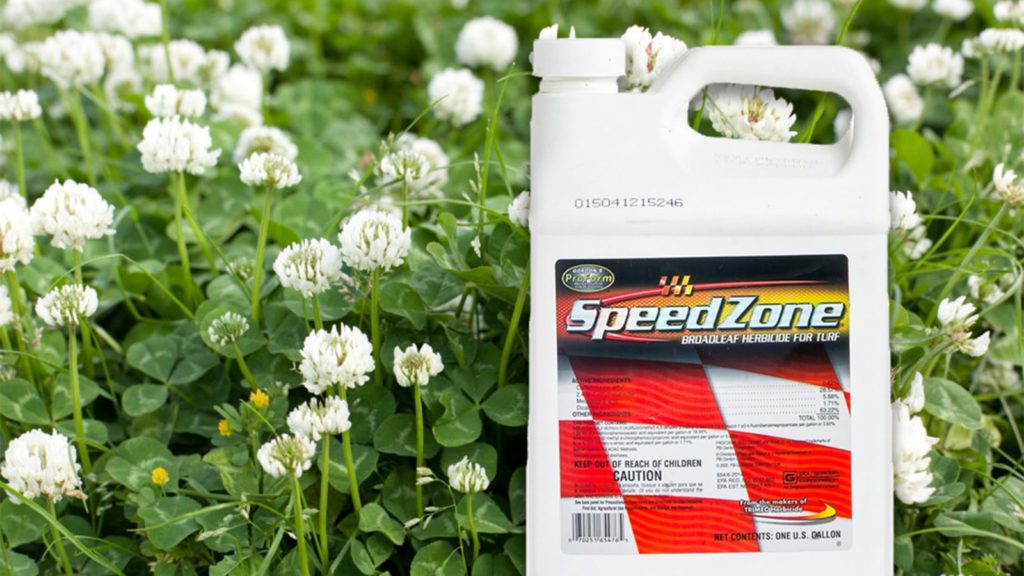 There are many different types of weeds that can appear in home lawns including a variety of grass weeds and broadleaf weeds. A perennial broadleaf weed that can often be a problem for homeowners throughout the United States is clover. Since clover is a legume, it is able to produce its own nitrogen and thrive in lawns with nutrient deficiency problems, even when turfgrass may be struggling. Although some may regard the clover flower as pretty, it certainly does not blend in well with home lawns. Fortunately, treatment options are available to manage this problem weed in the yard. It is important to understand the basic facts about herbicides so that you can make an educated purchase on a product that will effectively control clover without damaging your grass. This Sod University article discusses the characteristics of clover and highlights the weed control product SpeedZone Broadleaf Herbicide for Turf.

Most commonly, clover can be recognized by its round white or pink flowers and the three leaflets that are shaped like ovals on the end of a long stem. These flowers commonly appear in the early summer, although they may arrive around the early spring in southern states and then reproduce by dispersing seed or through creeping stems along the ground known as stolons. Clover, as a legume, also tends to favor soils that are lacking nitrogen. The weed will be most active when the temperatures are between 50 and 85 degrees and does not do well in dry areas of the lawn because of its shallow rooting system. Since clover is perennial, it can often be more difficult to control than an annual weed and may keep coming back year after year if proper management strategies are not put in place. Chemical strategies for these situations are further discussed later in this article under Pre-Emergent Control for Clover.

Some tried and true methods of control include keeping your lawn fertilized with Lawnifi®, which provides the grass with the nutrients it needs to stay dense and healthy so that it can keep clover away. A strong, dense lawn will outcompete weeds. Another strategy is to raise your mowing height, which will allow your grass to grow taller than the clover and can block the sunlight from reaching the weed. Finally, if the clover is a recent issue and has not become well established, it is possible to dig up the weed before it spreads and produces seed. However, when hand weeding it is extremely important to ensure that the entire root system is removed because even a small piece left behind will produce new clover plants. One tip for hand weeding is to pull weeds when the ground has just recently thawed as this is the time when this job will be the easiest, but you may need to bundle up if you can’t handle the cold!

Additional treatment options include the use of chemical controls, which may be necessary if the problem is widespread and cannot be easily taken care of by hand. A commonly used herbicide to control clover and other broadleaf weeds is SpeedZone Broadleaf Herbicide for Turf (active ingredients 2,4-D, 2-ethylhexyl ester 28.57%, Carfentrazone-ethyl 0.62%, Dicamba 1.71% and Mecoprop-P 5.88%). SpeedZone Broadleaf Herbicide for Turf is a liquid, selective post-emergent herbicide with superior cool weather performance. This post-emergent herbicide is known for controlling a large array of broadleaf weeds including clover, plantain, ground ivy, spurge, dandelion and common chickweed in both warm and cool season turf varieties. It is a fast acting weed control product that demonstrates visible results in hours and resists rain wash three to four hours after application. Click on the product label below for a full list of target weeds and more information.

How to Use SpeedZone Broadleaf Herbicide for Turf

SpeedZone Broadleaf Herbicide for Turf can be used for a single broadcast application or for multiple applications throughout the active growing seasons: spring, summer or fall. Avoid applying any herbicide in the summer as hot temperatures reduce the effectiveness of the herbicide product. Spot treatments are also appropriate for smaller sites of clover. If you choose to apply SpeedZone Broadleaf Herbicide for Turf multiple times, be sure to wait at least 30 days before a follow-up treatment.

*Depending on the severity of the issue, you may need to slightly increase or decrease the amount of product used in accordance with the product label.

Add ½ the amount of water to a spray tank and then slowly add SpeedZone Broadleaf Herbicide for Turf with agitation. Then fill the rest of the tank with water. Continue to mix thoroughly and agitate while spraying to keep the formulation mixed.

Use the appropriate fertilizer based on the label’s recommendations. Be sure to refer to the mixing directions on the label of the liquid fertilizer and perform a jar test for compatibility before applying to your entire lawn.

Before attempting to treat clover with chemicals, it is important to read the product label carefully to ensure that it will be compatible with your turf and not cause any damage. Refer to the product label above for a full list of application and mixing instructions.

One of the best strategies for recurring clover consists of applying a pre-emergent herbicide before weeds appear. Post-emergents, like SpeedZone Broadleaf Herbicide for Turf, target weeds after they’ve sprouted from the soil’s surface. The idea of a pre-emergent is to target those pesky weeds that come up every year before they sprout above the ground. Typically, pre-emergents should be applied in the spring and fall. You can read more about pre-emergents in How to Use a Pre-Emergent Herbicide in the Spring. When shopping for a pre-emergent herbicide, be sure to read the product label and make sure the herbicide is labeled to control clover. Also be careful to not use a product that may be harmful to your grass. The product label will specify which grasses to use it on.

Be sure to check out the rest of our herbicide products online here. For more information on weed control fundamentals, check out our Weed Control and Identifying Common Lawn Weeds blogs.