The Best Grass for the Gulf Coast 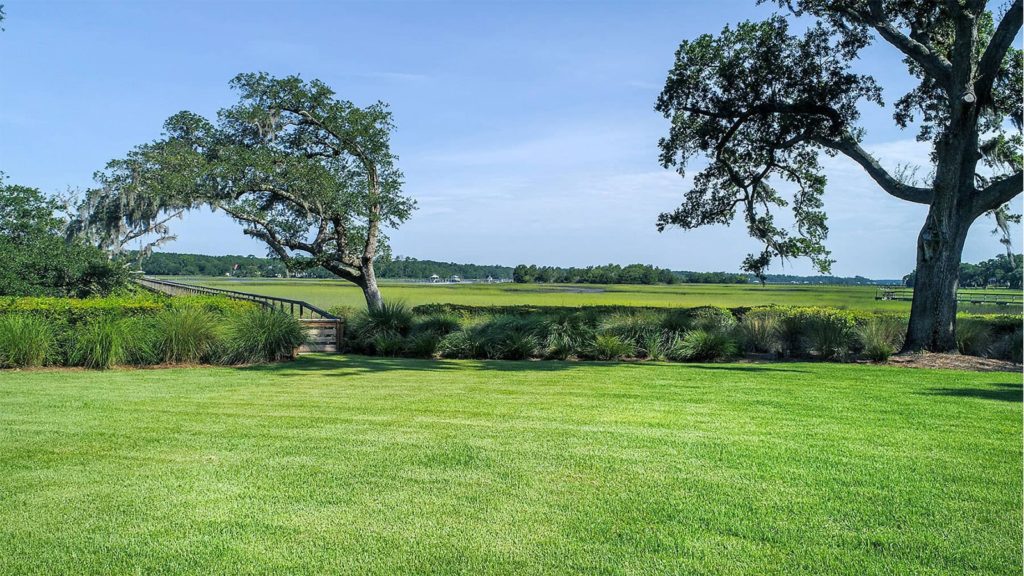 With gorgeous beaches and beautiful, year-long weather, it’s no wonder many enjoy living along the Gulf Coast. Living in one of the most beautiful places in the United States has many wanting to maintain a just as equally alluring property and landscape. Choosing the right type of turfgrass is a major factor that goes into presenting an inviting home. After all, who doesn’t want a home landscape with high curb appeal? Below are some of the best warm season turfgrass varieties and cultivars for the Gulf Coast region.

The Best St. Augustine Grass for the Gulf Coast

St. Augustine is both one of the most top-performing and pretty grasses to install in a yard along the Gulf Coast. Certain cultivars have a higher salt tolerance, which can prove really useful the closer you live to the ocean. Not only that, but St. Augustine’s thick blades present an almost tropical looking canopy that fits right in within the Gulf Coast setting.

Palmetto® St. Augustine grows a thick grass canopy that really chokes out weeds competing for space in the soil. With over two billion sq. ft. sold in its lifetime, Palmetto is the most sold, patented turfgrass variety in the world. Its qualities are extremely well suited for the Gulf Coast’s tropical, warm climates. As one of the most shade tolerant varieties available, Palmetto also demonstrates excellent cold, heat and drought tolerance. Palmetto is a dwarf variety of St. Augustine, so it doesn’t grow as high as other St. Augustines like Floratam, which is great if you really dread mowing the lawn. Click here to learn more about Palmetto or check out Palmetto’s product page below.

Although Palmetto is more popular, the University of Florida’s new St. Augustine variety, CitraBlue® St. Augustine, is gaining popularity and recognition in the Gulf Coast area. Known primarily for its deep blue-green color and disease resistance, CitraBlue also ranks among the top contenders for its shade tolerance. CitraBlue has less of a vertical growth pattern and spends more energy growing in a lateral direction allowing, for less mowing. The University of Florida bred CitraBlue with superior characteristics in mind so that it actually outperforms other turfgrass varieties—specifically that of Floratam St. Augustine.

CitraBlue is slower to develop drought stress symptoms and suffer damage from it, requires a reduced amount of nitrogen inputs compared to other St. Augustines which saves money spent on fertilizers, has a denser canopy that makes it more competitive against weeds than Floratam, fends off insects such as chinch bugs really well and requires less fungus prevention with improved resistance to diseases like gray leaf spot. Be sure to take a look at some of the university studies conducted on CitraBlue St. Augustine such as some of its breeding objectives, comparison of fertilizer programs and fungal research.

Floratam St. Augustine, which was developed in the state of Florida, is also a sensible choice for homeowners located throughout the Gulf Coast. Floratam is chosen because it is easy to maintain and can withstand periods of drought. Not suitable for areas with freezing temperatures, Floratam is best suited for areas that experience extreme heat. Floratam St. Augustine was released by the Florida and Texas Agricultural Experiment Stations in 1972 as a St. Augustine Decline (SAD) virus and chinch bug resistant selection, but it lost its resistance in the 1980s as the bugs adapted.

The Best Zoysia Grass for the Gulf Coast

With rain, humidity, heat and even hurricanes, living in the Gulf Coast means that there are a few climate challenges to overcome. With zoysia grasses becoming one of the most popular turfgrasses in the southern two-thirds of the United States, Sod University highlights the best zoysia varieties that will thrive in the area’s complex climates.

Bred in Brazil, EMPIRE® Zoysia has been extremely popular for both home and commercial applications in the tropical South because of its ability to flourish in warm, humid climates. Gulf Coast homeowners will love EMPIRE because of its wide, green blades that form a dense canopy.

Many lawns with St. Augustine grass are plagued with chinch bugs, but EMPIRE is extremely chinch bug resistant. A great feature that EMPIRE possesses is that it has the ability to grow in a variety of soil conditions that other grasses may have a hard time with. It tolerates saline soils commonly found in tropical areas along coastlines.

Featuring tough runners, rhizomes and deep roots that provide excellent sod strength, EMPIRE effortlessly tolerates stressors like wear and tear from kids or pets and periods of drought. Click here to learn more or check out EMPIRE’s product page below.

Developed by Kansas State and Texas A&M, InnovationTM Zoysia has proven again and again to be more shade tolerant than many other zoysia grasses and to be one of the hardier choices among its competitors. It’s medium-fine dark green blades create a soft feel and attractive look. This grass thrives in transition zone areas that experience hot, humid summers but also encounter cold weather periods during the winter, which may make it difficult for other grass types to survive. Innovation’s overall quality makes it a top choice for many homeowners in the Gulf Coast.

If your home is located in a part of the Gulf Coast that often experiences drought, take a look at Palisades Zoysia. This drought tolerant grass is medium-to-coarse in texture that is very dense and easy to keep up with on a maintenance level. While this grass is heat tolerant and even salt tolerant, it won’t do in a very shady yard because it needs plenty of sunlight.

The Best Bermuda Grass for the Gulf Coast

The homeowner who chooses bermuda grass for their landscape is oftentimes seeking to have the best looking yard on the block. If you favor the finer-bladed look, bermuda grass is for you. Although certain bermuda grass species will require a little more maintenance than St. Augustine, bermuda grass gives your lawn the elite, polished look that really stands out.

Celebration is a finer-bladed bermuda grass with an exceptional root system that allows for rapid recovery time. Its wear tolerance makes it a great choice for pets and kids to play on all day long. Be sure to check out a research summary on Celebration to see how it compares to some of the other bermuda grasses available.

While Tifway 419 Bermudagrass has been at the top of the list when it comes to sports turf, however, it’s also the perfect fit for a well-loved lawn. Tifway 419 is a deep green bermuda grass with a fine texture and excellent weed and disease resistance. It has a dense, rapidly spreading growth habit which allows it to recover from injury quickly—it’s also one of the most durable hybrid bermuda selections available. Tifway 419 has a medium-low, vigorous growth habit that establishes quickly upon planting. It tolerates close mowing heights of 1–2 inches and will thrive in the southern two-thirds of the United States.

TifTuf Bermudagrass was developed with the goal of having excellent drought tolerance. If you’re a homeowner who lives in an area with long, dry summers, TifTuf may be the best choice for you. This fine-textured bermuda grass uses 38 percent less water than other similar bermuda grass cultivars. It also has high shade tolerance and stays green further into the fall than other grasses. Like most bermuda grasses, TifTuf will thrive in the southern two-thirds of the United States. Read more about TifTuf and its comparisons to other bermuda grasses in Celebration vs. Latitude 36 vs. TifTuf Bermudagrass.

The Best Centipede Grass for the Gulf Coast

Centipede grass is a common turfgrass found throughout the southern two-thirds of the United States. Performing best in acidic soils and warm, humid climates, centipede grass can be purchased and installed as pallets of sod, sod pods and seed.

Santee Centipede is also offered as a seeded variety under the Lawnifi product line. LawnifiTM Santee Centipede Seed’s individual grass seeds are coated with a layer of Lawnifi fertilizer designed to promote root growth and successful establishment at planting. Lawnifi Santee Centipede Seed is the best grass seed for filling in bare spots or starting a new lawn. Read more about its many benefits and features here.