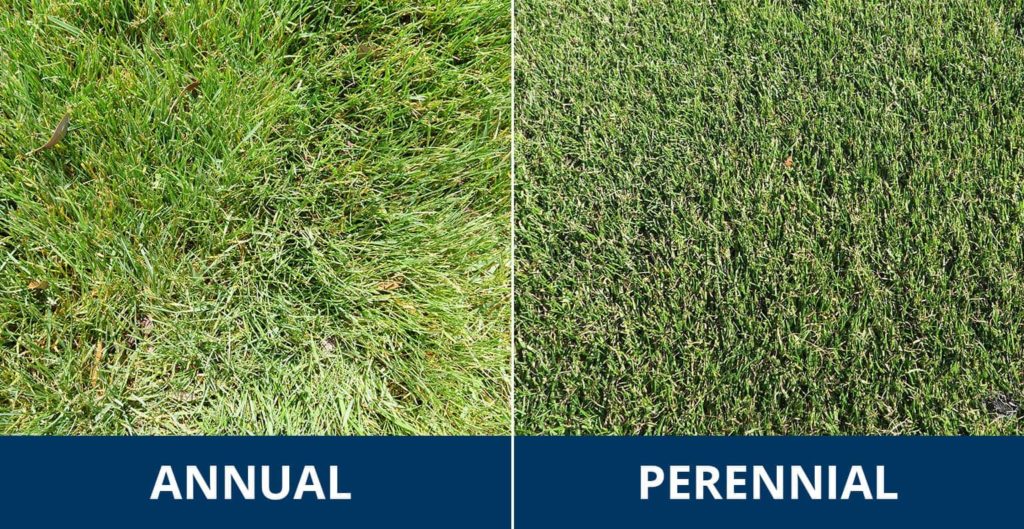 Both annual and perennial ryegrass seed are used around the world for overseeding on professional golf courses and sports fields in the southern United States as well as in home lawns around the globe. As a cool season grass, both perennial and annual ryegrass seed can be used as a permanent turfgrass in home lawns located up the northern areas of the United States as well as the transition zone. They can also be used in the southern two-thirds of the United States to overseed warm season lawns during winter dormancy like bermuda grass and zoysia grass.

In a brief synopsis, annual ryegrass seed is planted for temporary reasons such as a one-time color enhancer during warm season winter dormancy, weed suppression or short-term erosion control as its life span lasts for a single season. Perennial ryegrass seed is more permanent as it lasts for several seasons, provides long-term erosion control and serves as a great food source for pasture-grazing animals. Read more about their generic differences below.

What is Annual Ryegrass Seed?

Annual and perennial ryegrass are similar in a lot of ways, however, they’re both different sub-species of ryegrass. Both types are fairly bright in color, giving off a vibrant, light green shade to home lawns. Annual ryegrass is usually slightly lighter in color than perennial. It also has a more coarse texture, will reach about six inches in height and grows in a bunch-like pattern. The graphic above describes annual ryegrass as having a rolled vernation. This means that within the bud of the grass blade, more grass expands through rolled shoots as seen in the NC State Extension photo below. In general, annual ryegrass grows in US Department of Agriculture growing zones 4–9 and should be kept at a mowed height of 1.5–2 inches.

The Benefits of Annual Ryegrass Seed

There are several reasons why homeowners prefer annual ryegrass seed over perennial during the selection process. Both types of ryegrass provide the immediate satisfaction of green color with seed that germinates between 5–7 days. Both types can be used to decrease weed pressure by competing for soil space, shade protection for other vulnerable grasses and erosion control by delivering a grassy surface that will hold soil in place during wet conditions.

The Disadvantages of Annual Ryegrass Seed

If you’ve made the decision to install annual ryegrass seed, there are a couple of options you can pull from. But first, think about how much seed you’ll need based on the square footage of the area you want to cover. Then try to find the amount of seed you need for a decent price. SOS 211 Ryegrass Seed comes in a 50 pound bag of 50 percent perennial and 50 percent annual ryegrass seed. This is beneficial if disease tolerance may be an issue for you.

SOS 211 provides quick establishment, improved turf quality and stronger spring persistence. This is a great overseeding variety and will germinate with soil temperatures in the mid-40s, which allows for successful overseeding results late in the season. This is great for homeowners looking to maintain a green lawn in the winter. For overseeding, apply 10–15 pounds per 1,000 sq. ft. A single 50 pound bag will cover 5,000 sq. ft.

If you’re looking for 100 percent annual ryegrass seed, we’ve listed a few top-rated items found on Amazon for you.

Upon application, you will need to use a broadcast or drop spreader and apply at the rate the annual ryegrass seed displays on its product label. Be sure to follow our Grass Seed Planting Guide and Establishment Guide.

What is Perennial Ryegrass Seed?

It will grow to about one foot in height without mowing and grows in bunch-like patterns. Compared to annual ryegrass’s rolled vernation, perennial ryegrass has a “folded” vernation, meaning that the bud of the grass blades expand through folded shoots. You can get a visual representation of the differences in the NC State University Extension photo below. In general, perennial ryegrass grows in US Department of Agriculture growing zones 5–7 and should be kept at a mowing height of 1.5–2.5 inches, which is slightly higher than that of annual ryegrass.

The Benefits of Perennial Ryegrass Seed

The biggest advantage that comes with perennial ryegrass seed is that you only have to purchase and plant it once. Annual ryegrass, in comparison, must be purchased and planted every year. This becomes expensive over time.

The Disadvantages of Perennial Ryegrass Seed

If you’ve made the decision to install perennial ryegrass seed, there are a couple of options you can pull from. Be sure to think about how much seed you’ll need based on the square footage of the area you want to cover. Next, try to find the amount of seed you need for a decent price.

Upon application, you will need to use a broadcast or drop spreader and apply at the rate the annual ryegrass seed displayed on its product label. Be sure to follow our Grass Seed Planting Guide and Establishment Guide.

When to Use Annual vs. Perennial Ryegrass Seed

In certain situations, homeowners may be confused about when it is actually beneficial to use annual ryegrass seed over perennial, or vice versa. A lot of times, it mainly depends on the climate and growing zone you’re located in. They both germinate in 5–7 days and have a similar bright green color, although perennial ryegrass is usually somewhat darker.

Your decision between the two may also depend on your lawn’s conditions. For example, if you have a lot of shade in your yard, annual ryegrass may be a slightly better option. Lastly, if you don’t mind spending a little extra money, perennial ryegrass is a great option because once it’s purchased and installed, you will only need to take care of it and make sure it doesn’t die. Annual ryegrass seed needs to be purchased and planted every year.

Lastly, Sod University has a couple of helpful tools to recommend that may help you with your installation process. Be sure to apply with a broadcast or drop spreader and fertilize the new grass seed appropriately with the suggested fertilizers below. If you really just want a green lawn during your grass’s dormancy period and don’t want to bother with seed installation, another option for you is to use turf colorant like the Endurant Perennial Rye product listed below. Learn more about this practice in Turf Colorant: A Great Option for Maintaining Winter Color in Warm Season Lawns.