What is a Billbug and How to Control Them 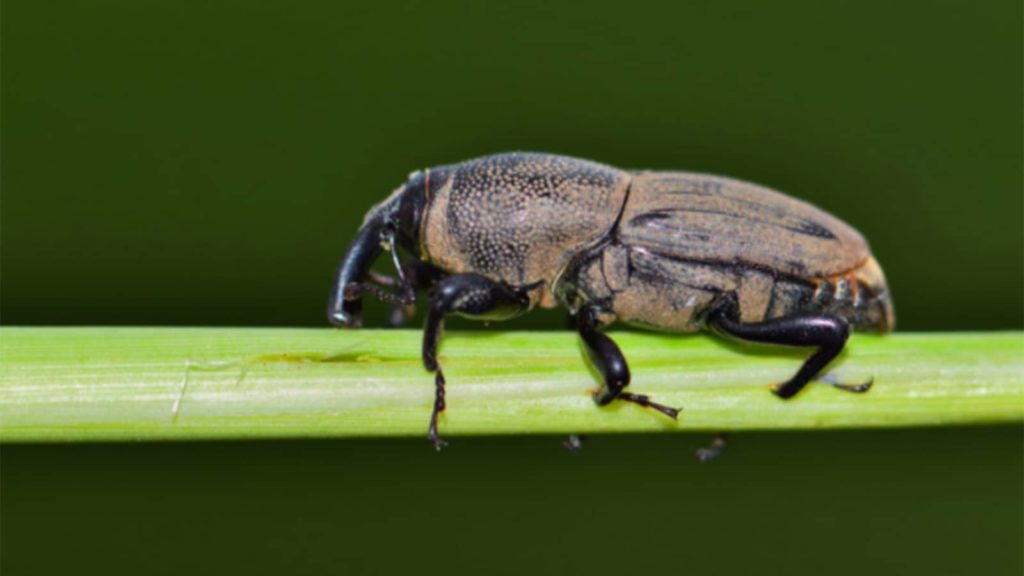 There are many grass insects that inhabit home lawns throughout the United States including mole crickets, chinch bugs, the sod webworm, grub worms and billbugs. Our Insect Identification blog has a great video and other content that differentiates between some of the most common insects and pests you may find in your lawn. This particular issue of Sod U, however, discusses how to detect billbugs and control them with various methods.

What is a Billbug?

To the unsuspecting homeowner, the above lawn may appear to be suffering from drought stress when, in fact, it is showing signs of billbug damage. A billbug is a weevil or snout-beetle that, in its larval form, can cause damage to your lawn and is often misdiagnosed as drought stress.

The hunting billbug can appear in the United States from New Jersey to Florida, through the Gulf into Texas and north to Kansas and Missouri. Bluegrass billbugs are found in the northern states from New England to Washington.

The bluegrass billbug has a coarsely punctuated area behind its head that looks like it is filled with numerous tiny holes. Although the hunting billbug seems to have the same small holes in the area behind its head, it also has a smooth, black, Y-shaped area down the middle. Take a look at the images below to see the difference between the hunting billbug and the bluegrass billbug.

Pictured above from left to right: a bluegrass billbug and a hunting billbug. Photo credit from https://www.gcsaa.org/.

Understanding the lifecycle of billbugs can help you learn about what to look for at different times of the year (adults or larvae) and what insecticide to apply to break their lifecycle. Depending on the species, billbugs overwinter either as adults or as larvae. If they overwinter as adults, they emerge in the spring, mate and lay eggs in the crown of the turfgrass.

The larvae then emerges and begins to feed in the crown of the turfgrass, moving down the stem and then eventually below ground into the thatch layer and roots. The larval lifecycle is about a month.

If the billbugs overwinter as larvae on the other hand, they immediately begin to feed on the roots in early spring, pupate in the soil, emerge as adults and continue their lifecycle. Regardless of how they overwinter (adults or larvae), it is critical that you break their cycle in your lawn by killing both the adults and the larvae.

The below graph represents the data collected in a university study provided by Dr. Brandenburg at NC State on billbugs. Notice the two spikes in adult populations of billbugs in May and September. This data suggests that larvae were feeding on and causing damage to the grass in the March–April and July–August time periods. Generally speaking, billbug damage is first visible during either or both of these two time periods.

Signs of a Billbug Infestation

Splotchy dead spots in your lawn can be caused by several ailments. If you suspect billbug damage, you are going to need to get your hands dirty. Rule out poor irrigation by conducting the “tug” test. Drought-stressed turf will not pull up very easily.

To conduct the tug test, from the middle section of damaged grass, grab the turf at the base and pull up on it. If it comes up very easily, that is a sign of billbug damage. If it does not come up very easily, then you may need to consider an irrigation audit or possibly look into fungus as a possible culprit.

If you are easily able to pull up your turf, search in the top layer of soil for billbug larvae. If none are visible, you will want to continue your investigation by digging a hole that is four to five inches deep with a hand trowel (so it can be easily replaced) to continue your search.

Below is a picture of an adult billbug and its larvae.

Adult billbugs are small (between ¼ –½ inches in length); they are weevils, so you’ll be able to see the distinctive snout or bill at the front end of their head. They can be seen walking around on blades and down at the soil level.

Billbug larvae are white or cream colored, legless and brown-headed. When fully developed, they too are about ¼–½ inches long. Their bodies are curved. Another sign to look for in the thatch layer is the excrement (frass) of larvae, which looks like saw dust.

If you have determined that you have billbug damage, you will want to employ both an immediate curative solution as well as a long-term preventative strategy. If you are dealing with visible turf damage caused by billbugs, you will want to immediately apply Bithenthrin, which offers insect control and kills on contact.

As is always the case, prevention is the best medicine, so you will also want to begin applying Imidacloprid, which kills systemically, every May or June. Below are before and after photos of a golf course after treatment for billbugs.

Once you have decided to begin employing a strategic application of a systemic insecticide, you should see a difference in the long-term health of your lawn. You should also know that a healthy lawn that is properly watered and fertilized is better equipped to withstand billbug damage than a lawn that is underwatered and poorly fertilized.

Although fertilizer doesn’t treat infestations, a proper fertilizer schedule will help your lawn remain strong and endure stress a little better. In addition to employing a regular irrigation program (in general, about ½ inch per week, taking into account rainfall), you might want to consider a fertility program such as Lawnifi®.

Lawnifi is a liquid fertilizer program designed to give your lawn the nutrients it needs when it needs them. Subscribe to receive seasonal Lawnifi fertilizer boxes throughout the year, or purchase each seasonal box individually. You can learn more about Lawnifi at lawnifi.com or by reading Why Use Lawnifi Fertilizer?.

If you spot insects in your lawn but aren’t sure what kind of insects they are, be sure to take a look at our Insect Identification blog.